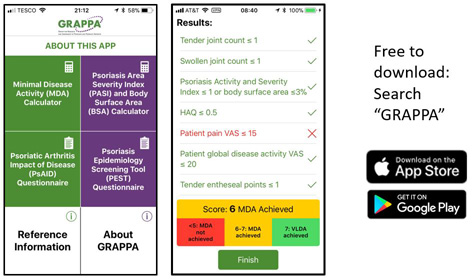 The BSR Annual Conference in Liverpool in May 2018 included an update session on Psoriatic Arthritis (PsA). Professor Anne Barton from Manchester presented an update on the genetics of PsA. Many of the genes predisposing to skin psoriasis and PsA are shared by these two conditions, but now Professor Barton’s group have identified four gene variants that differentiate PsA from skin psoriasis alone. These include variants in HLA-B27, the 5q31 region, IL-23R and PTPN22. Her group are now investigating the functional role of these variants and whether they can help predict which patients with psoriasis will go on to develop PsA in future.

Professor Dennis McGonagle from Leeds gave an update on enthesitis and the role of imaging in PsA, particularly the role of MRI. Finally, Dr Laura Coates from Oxford discussed treat-to-target in PsA. She discussed the advantages and disadvantages of the MDA and DAPSA as targets for treat-to-target approaches. Dr Coates provided practical advice and highlighted the new free GRAPPA app, available from iTunes and Google store, designed to support the assessment of patients with psoriasis and PsA.

The BSR also included a meeting of the Spondyloarthritis Special Interest Group, with an update on BRIT-Pact activities over the past year and a talk by Dr Ai Lyn Tan from Leeds about the overlap and difficulties of distinguishing osteoarthritis and PsA on imaging.

There were also several poster presentations on long-term data from the secukinumab trials indicating sustained improvement in quality of life, function and fatigue, as well as sustained PASDAS related low disease activity at two years.